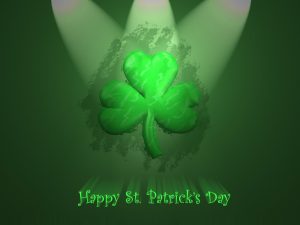 When some people think of St. Patrick’s Day, they think of drinking beer and wearing green. There is so much more to St. Patrick’s Day than that. Every year on March 17th, the Irish and the Irish- at- heart across the world celebrate St. Patrick’s Day. What had began as a religious feast day for the patron Saint of Ireland, has become an international festival celebrating the Irish culture with parades, dancing, special foods and a whole lot of green.

Saint Patrick was a 5th century Romano-British Christian missionary and bishop in Ireland. St. Patrick’s Day was made an official Christian feast day in the early 17th century. The day commemorates the death of Saint Patrick and the arrival of Christianity in Ireland.

St. Patrick’s Day celebrations usually involve public parades and festivals. Also, on St Patrick’s Day, it is customary to wear green clothing or accessories and/or shamrocks. It is said that saint Patrick used shamrocks to explain the Holy Trinity to the Pagan Irish. The color green has been associated with Ireland dating back to at least the 1640’s, when the green harp flag was used by the Irish Catholic Confederation. Green ribbons and shamrocks have been worn on St. Patrick’s Day dating back to the 1680’s.